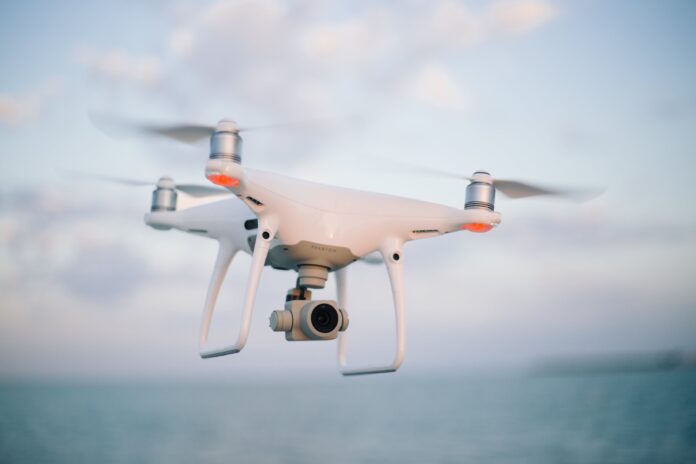 The use of unmanned aerial vehicles or, according to the commonly used term, “drones”, has become very common in our society. The wide-ranging possibilities offered by these aerial vehicles mean that their use is not solely limited to military missions since as technologies improve and costs fall, their use is rapidly becoming more widespread, including aerial photography, product deliveries, agriculture, policing and surveillance, infrastructure inspections, and also drone racing. In light of this, these aerial vehicles could be analyzed as tools that provide external technical assistance to an author (copyright holder). In this sense, works created by an individual with the intervention of a machine could be, in principle, protected by copyright, provided that they reflect their author’s creative contribution and are original in the sense that they are the author’s own intellectual creation. There are several areas in which drones can acquire a secondary but essential role from a creative standpoint.

Given their precision and versatility, drones can be used in many ways for filming and photography purposes. In these situations, the use of drones is more often driven by the search for new visual possibilities than by necessity. Indeed, there is no doubt that drones can be used as technical tool to create photographic or audiovisual works protected by copyright, but it is noteworthy that these aerial vehicles could provide greater creative freedom to authors thanks to the different and several shots, perspectives, effects, movements, and high-resolution images they can offer. In this sense, the use of drones does, of course, achieve something; it allows for originality to be better appreciated. Nevertheless, the limits which are laid down in the regulations governing the use of drones must be respected (e.g. the Regulation 2019/947, of 24 May 2019, on the rules and procedures for the operation of unmanned aircraft – entered into force a few months ago -, and the Spanish Royal Decree 1036/2017, of 15 December, which establish certain regulations concerning, among other issues, the airspace in which drones flight activities may be carried out, the visual range of the drone pilot, and the maximum permitted height). Depending on the specific case at hand, these limitations could either directly prevent the use of drones or restrict the creative freedom seriously affecting the original nature of a creation.

Drones can also be used for topographic and geographic purposes, mainly by taking photographs or videos which might end up as maps, plans and three-dimensional works relative to geography and topography protected by copyright. The usual purpose of these kind of scientific works is to provide objective data, so that, in general, the margin of creative freedom will be limited and, consequently, the originality required will be lower. In essence, originality will have to be assessed by way of the selection and arrangement of the objective content is expressed. Therefore, issues such as the map scale which allows for a map to be physically and visually distinct from other maps; legend (symbols); labels; grids and index; colours; the citation which make it easier for people like us to understand the basic components of the map; and drawings or photographs will be relevant in order to appreciate originality. In this context, drones can examine very large areas, be programmed and maneuvered accurately to precise locations (note that the corresponding software could also be protected under copyright), and easily navigate traditionally hard-to-access areas and thus authors could enjoy new creative possibilities that will allow originality to be better expressed.

One of the most innovative aspects of drones is the possibility of using them in certain competitions; specifically, in so-called drone racing. Drone racing is a sport where pilots use drones to fly around a set course as fast as possible. Nowadays, almost all drone races are done using First Person View systems where pilots use cameras to fly drones as if they were sitting in the cockpit. However, drone racing events cannot be regarded as intellectual creations classifiable as protected works because they are subject to rules of the game, obstacles, and specific objectives pre-established leaving no room for creative freedom for the purposes of copyright (in this sense, Judgment of the ECJ, 4 October 2011, in Joined Cases C‑403/08 and C‑429/08). Nevertheless, there are other kind of competitions in which flying is freestyle and therefore could leave room for creative freedom. This freestyle aerobatic flying is a free way of more relaxed flying, with no boundaries or strict rules imposed. In this context, pilots can perform loops, flips, and other maneuvers combined. In fact, this kind of aerobatic flying is often accompanied by musical works so that the pilot performs series of steps and movement sequences in a manner which makes them identifiable with precision and objectivity. All these circumstances are reminiscent of choreographic works and, if the steps and movement sequences are original, we could be dealing with works protected by copyright.

Drones can also be used as tools to produce artistic effects in recreational activities. In this respect, the use of drones provides the capability to paint the sky with 2D or 3D shapes and complex animations and scenes based on synchronized movements (by way of example, see Drone Light Shows). These shapes, animations, synchronized movements, and scenes could also be protected by copyright if they are original. It is also noteworthy that drones have been used as a musical tool to create copyrightable musical compositions. In this sense, see the auditive investigation made by composer Gonçalo F. Cardoso and designer Ruben Pater, which focuses on the conceptual (sound) life and death of an aerial drone machine in the 21st century.

And what about the degree of autonomy of drones?

The flight of drones may operate under remote control by a human, or with various degrees of autonomy, up to fully autonomous drones. Nevertheless, note that a work can enjoy copyright protection, provided that it contains elements which represent the intellectual creation’s expression by the author. Consequently, nowadays, fully autonomous drones will hardly give rise to a work protected by copyright since there will be no provision for human intervention and all elements will be an expression of the mere drone. In addition, the above-mentioned national and European regulations for the operation of drones set a framework in which autonomous drones cannot be used without restraint, although rules allowing fully automated drones to fly with less restrictions are closer. Another issue is that of software and algorithms, where trade secrets or software originality could be analyzed. In any case, if the drone is not fully autonomous but has certain degree of autonomy, works created with  its intervention could be protected by copyright, provided that they reflect their author’s creative contribution by way of, for example, allowing the pilot to directly intervene in flight management or in any other creative task. In that case, what should be primarily looked at is the degree of human intervention, and if it is somehow qualitatively and quantitatively relevant from a creative point of view.