Just back from an incredible week at South by South West in Austin. After the encounter with conversational robots from my previous post (the robots made the front page of USA Today), SXSW continued to surprise. I had (naively) assumed that the conversation between Nirvana bassist Krist Novoselic and Daily Beast editor John Avlon would mostly feature memories of days on the road with Kurt Cobain, but Krist turns out to be a passionate campaigner for voting reform in the USA and the session got into some alarming detail about congressional district gerrymandering in the US political system along with a plea for proportional representation. Equally unexpected were Let’s Eat Grandma, one of the bands featured in the BBC Music showcase at the British Music Embassy venue. The set was a truly unique combination of performance art and music, featuring the two 17 year olds alternating between playing a range of different instruments, doing playground style clapping games and occasionally hiding behind their mix desk as the music continued on loop… Strange in the best possible way. 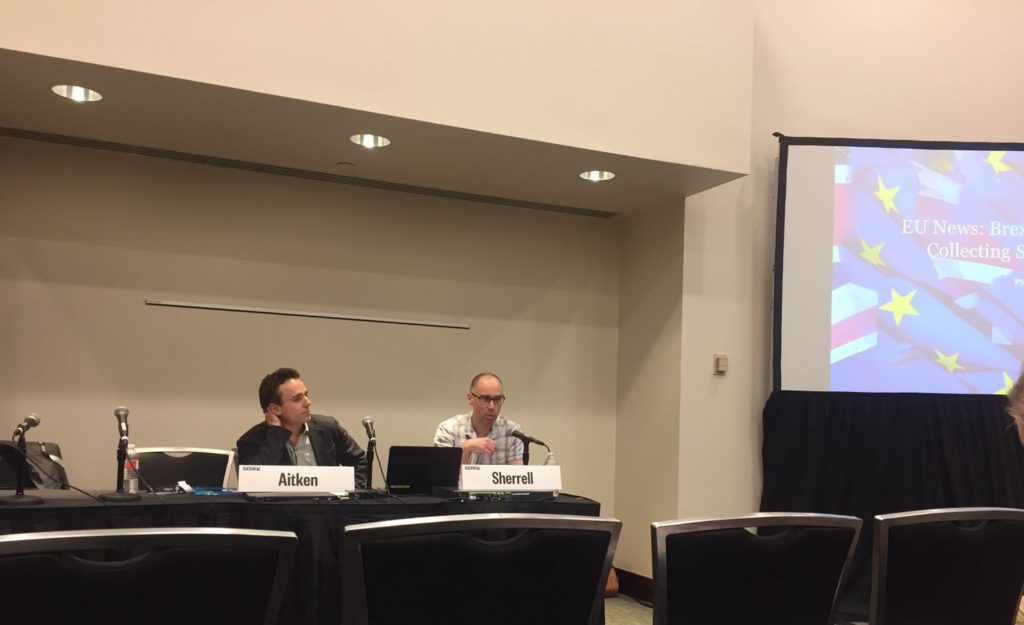 Most interesting digital learnings? Who knew that no digital music service has ever had a single profitable year (with thanks to Paul Fakler at Arent Fox)? Or, on a related, theme, that there are 0.5 billion uses of PRS for Music repertoire worldwide every hour (Jonathan Aitken of PRS for Music)? Or that Adobe is working on a ‘photoshop for voice’ technology (Project Voco), which already has the ability to take a recording of someone’s voice and within a matter of minutes manipulate it digitally so that the recording can be made to say whatever you want…

On the professional side the sessions were excellent. Non-robot highlights included Paul Fakler on the Digital Music Royalty Apocalypse (explaining the disparity between the master and publishing royalties paid by US digital service providers), a session on the regulatory challenges posed by Virtual Reality, and a panel giving the inside track on the massive damages award in the Blurred Lines copyright dispute. And, of course, our session on Brexit and its implications for the music industry, which I ran as a double-header with Jonathan Aitken talking about the changing collecting society landscape in Europe.

My view on Brexit was that the UK music industry has significantly fewer potential hurdles to face than other sectors. When it comes to goods and services, the WTO rules already prevent any tariffs on physical media and the supply of digital services across borders is also of course tariff-free. There are greater concerns in relation to people: UK bands are worried at the likely loss of their freedom to tour the EU without visa requirements, and the cultural diversity of the UK music industry means that it would inevitably be impacted if it becomes harder to recruit talent from the EU and elsewhere. And when it comes to non-tariff trade barriers (regulation etc) there is a concern about reciprocity gaps opening up in relation to some areas of media regulation and clearance processes (see my piece on MediaWrites). Nonetheless, the music industry (and the media sector in general) certainly seems to have significantly fewer issues to sort out going into the Brexit negotiations than, say, the automotive sector with its complex integrated supply chains across Europe, or the financial services industry and its reliance on passporting.

As we headed to the airport after an excellent week in Austin the taxi driver was lamenting how South by South West has changed. It started in the late 80’s as a small independent music festival and hasn’t stopped growing since, with an increasing focus on tech as well as all strands of the media and sports industries. Speakers over the last decade have included most media/tech royalty (e.g. Mark Zuckerberg, Jimmy Wales) adding their voices to the continuing strong music theme (Lady Gaga, Bruce Springsteen, Pussy Riot, Billy Idol to name but a few). I think the taxi driver would prefer shorter lines for the best gigs and less corporate types spoiling the atmosphere, but from my perspective it is a phenomenal place to learn, meet and have some fun.