Back in November 2015, the Eastern High Court of Denmark handed down a judgement in relation to a dispute between the Danish Consumer Ombudsman (on behalf of a consumer) and the Danish Travel Group; a travel portal offering cheap airline tickets from various airline companies through their website goleif.dk.

Facts of the case

The case concerned a consumer who had purchased a trip to Nice using the travel portal goleif.dk. The consumer flew with airline SAS to Nice and with another airline, Cimber Sterling, on the return-trip. Meanwhile, Cimber Sterling went bankrupt and the consumer had to purchase a replacement ticket.

The question for the court was whether the consumer could claim the expenses for the replacement ticket from goleif.dk (The Danish Travel Group) – as there were no funds left for unsecured claims in the Cimber Sterling bankruptcy estate. The Danish Travel Group denied this claim on the basis that they were only acting as an intermediary and not a contracting party.

In January 2014 the consumer lost the case at the City Court of Roskilde. The City Court emphasised that goleif.dk did inform the consumers that they were only an intermediary on its website and that Cimber Sterling was the party contracting with the consumer. The City Court found that it was sufficiently clear from the website that the agreement was made with the airline companies themselves and not goleif.dk.

The Court emphasised that: (1) it’s not commonly known among consumers that travel portals do not trade in their own name; (2) the consumer could not assume that he/she was entering into an agreement directly with the airline company, due to his/her lack of knowledge and the general impression given by the website; and (3) the website didn’t explicitly state who the consumer was entering into an agreement with.

The clarity required for displaying this information seems to be quite substantial! goleif.dk stated both on their website and in the travel terms that they were a “provider” and didn’t “sell travels in their own name”, but this was apparently not enough. The Court reasoned that the average consumer, on the basis of this information, couldn’t properly deduce his actual legal position towards Danish Travel Group.

Following the decision, the Danish Consumer Ombudsman, in co-operation with the Danish Travel Agency Association, has drafted a concrete example of a digital booking process for plane tickets where information about the relevant contracting party is sufficiently shown.

During the booking process the consumer has to accept agreement of a short text twice in order to proceed to the next page. Such a booking process is already in use on Danish travel portal “FDM travel” and an example of the text can be seen below. 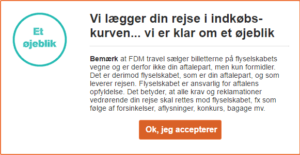 The text reads that the tickets are sold by the airline company, that FDM is merely an intermediary and that all claims should be directed to the airline.

Summary & advice for online portals and other online intermediaries

In short, the main difference between then and now seems to be the “double-notification” requirement determined by the Consumer Ombudsman, meaning that the explanatory text (as shown above) must be shown to the consumer twice before final sale of plane tickets facilitated by an online travel portal.

The Court decision and guidance from the Consumer Ombudsman will most likely have a spill-over effect on online intermediaries in general.

Consequently, if you’re an online intermediary facilitating sales between businesses and Danish consumers, you will most likely need to implement the “double-notification” procedure to make sure that consumers are not able to bring claims against you directly.